Stakeholder Map Prompt: Using the instructions from “How to Create and Use a Stakeholder Map,” create a stakeholder map in your notes, either individually or with your class. Show the topic, the subjects affected, and possible outcomes based on the ideas introduced at the beginning of this article and your own background knowledge of the topic.

In December 2019, the United Nations held talks in the hope of abating (and adapting to) the changes to our global environment due to the industrialization and emissions of humans. President of the United States Donald Trump expressed skepticism about any moral imperative to act, and other countries have been considering defection from previous joint commitments. If the United States continues to consume resources at its current rate, the United Nations’ climate goals will be impossible to reach. This interdependence is what makes climate change agreements necessary: global warming impacts nations differently, irrespective of any country’s particular contribution to the problem. Thus, tied up with the responsibility to commit to taking action is the question of whether there should be different burdens depending on the level of industrialization and development (i.e., consumption) of the nation in question.

Environmental ethicist Martino Traxler distinguishes between two approaches in assigning the duties and burdens for responding to climate change: a policy of justice and a police of fairness. The first approach would be “just,” in that it takes into consideration the historical context in which we now find ourselves, as well as the power dynamics at play. For instance, placing identical duties on all countries to reduce energy consumption equally doesn’t attend to countries’ differing ability to pay, their varying causal contributions to the current state of things, and the extent to which various countries have unequally benefited from previous policies and activities that were environmentally damaging. For instance, some developing nations are improving economically by taking advantage of some less-clean technologies, and it is arguably hypocritical for developed nations with a history of colonialism, imperialism, or military interference and manipulation to intervene at this stage and charge these developing nations with an obligation to reduce their carbon footprint. Such a policy would slow the progress toward leveling the international playing field. Countries that are developing now and changing the shape of their economies in order to grow out of poverty may have greater claim to use resources that have damaging effects on the environment than those countries whose actions are responsible for placing the globe in this current climate crisis. Furthermore, these developed nations have created the conditions for global poverty that now exist — conditions that might be eased by allowing developing nations the use of the same environment-damaging resources of which industrialized nations took advantage.

Each of these approaches would distribute burdens unevenly internationally, and typically industrialized nations would bear heavier burdens than those nations that are in the process of building their economies. This can be concerning for the most-developed nations and the nations that have experienced the most power and privilege historically. For nations that already have systems of infrastructure that involve emitting greenhouse gases, for instance, committing to being more environmentally responsible according to the just approach would require committing to a strikingly different way of life. Some still may recall George H. W. Bush’s declaration at the 1992 Earth Summit in Rio de Janeiro that “The American way of life is not up for negotiations. Period.” In 2012 in Rio de Janeiro, delegates noted that a child born in the developed world consumes 30 to 50 times as much water as one born in the developing world, emphasizing the different relation to resource consumption individuals from different societies have.

These features highlight how a just approach to burden-sharing may disincentivize the richest, most internationally powerful nations from commiting to climate change. The alternative approach style is a fair model of burden allocation, which has each nation share evenly in the responsibility to remain in a safe zone of resource consumption and emission standards. The fair approach presents a clean slate and looks forward, rather than backward at the contextual perspective of the just approach. The approach is fair in the sense that there is even distribution of responsibility, but most find the just approach more appropriate. Are there reasons why we might find the fair model appealing? The breakdown at the UN in December suggests several reasons why.

When we face an issue like climate change, nations need to determine how to act together. It’s difficult enough to determine the path for a single country or nation, but collective action like this requires agreement and commitment that structurally resembles classic dilemmas from game theory and economics. Traxler argues that because of these structural similarities, we should opt for fair rather than just allocations. In short, because the cost of the rich countries deferring is so great, we need to construct agreements that don’t over-burden them. As we saw in 2019 with countries like China and India hesitating to make commitments to change if the U.S. isn’t on board, Traxler may be onto something. In modeling climate change agreements in terms of incentivizing the related parties to not defer, Traxler is suggesting that we face an international Prisoner’s Dilemma.

The Prisoner’s Dilemma is a classic problem in game theory. The puzzle arises when what is in the best interest of a collective diverges from what is in the interest of an individual. The Prisoner’s Dilemma is set up as follows: two burglars are arrested and separated so they cannot coordinate. The authorities are attempting to get a confession from at least one of the burglars to aid in their investigation and conviction. If both burglars remain silent, they will each receive a sentence of one year. The authorities are attempting to incentivize cooperating with them because they would get information and successful convictions. However, the information will be most useful if one burglar cooperates and turns on the other, allowing the authorities to “throw the book” at one of them. Therefore, if one of the burglars betrays their comrade and gives information to the authorities while the other remains silent, this would result in the betrayer going free and the silent conspirator getting an eight-year sentence. If both burglars attempt to achieve this end (confessing in hopes that the other remains silent), the authorities have information on both of them and neither can go free. Instead, both will serve five years. Each burglar thus faces the decision of whether to cooperate with their conspirator or betray them and confess to the authorities. The possible combinations and outcomes are displayed in the table below. 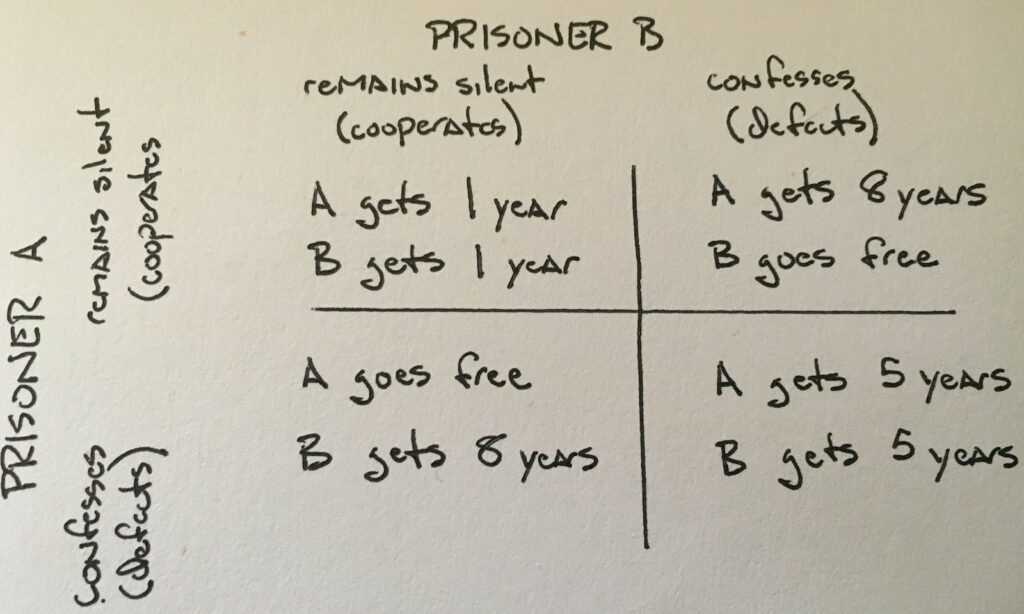 The reason this poses a dilemma is that the ideal outcome for each burglar is to exploit the cooperation of the other (i.e., to defect while the other stays silent). This creates a scenario where what is in the individual’s best interest is at odds with what is in their collective interest; if we consider the burglars together as a group and evaluate what would get the best outcome overall, then they should both remain silent. If, however, the individual considers only their self-interest, then there is great pressure to defect so as to potentially receive the best individual outcome (go free) and always avoid the worst (eight years).

The structure of the Prisoner’s Dilemma arises in a few areas of public life, not just among police bargaining with alleged criminals. The key to the dilemma is that what is collectively rational comes apart at times from what is individually rational. This is also the tension in Tragedy of the Commons cases. The Tragedy of the Commons describes cases in economics or scenarios in shared-resources situations where the best thing to do from an individual level is to consume more than others, but this focus on immediate use leads to a situation such that our shared ability to use the resource over time is undermined.

Described by William Forster Lloyd in the 19th century, we could imagine a case of the Tragedy as a river by a village that sustains an ecosystem containing fish. If the village fishes in the river some reasonable amount over time, the river is sufficient to replenish itself and feed the village. So, collectively speaking, it’s rational for the village to maintain fishing levels at this restrained rate. However, at an individual level, each villager is in a position where they have access to a resource that is potential income, and though it undermines the future use of the river and the other villagers’ potential use of the resource, overfishing to get more food and more resources is in the individual’s best interest. Thus similar to the way the burglars have conflicting strategies in the Prisoner’s Dilemma, in shared-resource scenarios, there is tension between individual and collective interests.

In order to avoid countries defecting and not living up to the commitment to abate climate change, we may need to “sweeten the deal” a bit, according to Traxler and not go with the just approach that would perhaps be too burdensome to the richest, most industrialized nations. This would give them fewer reasons to over-consume and ignore the agreements. However, it would also perhaps produce less pressure for the richest and most able countries to aggressively research “cleaner” alternatives to the technology so that they may continue something like their current ways of life.

Respond to the following questions in your notes and through classroom discussion.