Subtitle: A Literary Study of Battle Narrative in the Ancient Near East and in the Bible 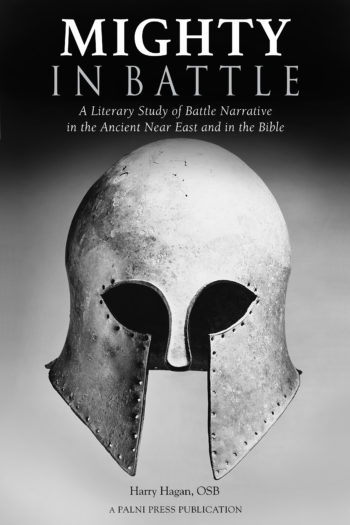 Book Description: This literary study examines the heroic and the royal patterns of battle narrative in the ancient Near East and then turns to how the Bible uses and reshapes these patterns, particularly with its emphasis on the Lord as the hero—a theme underscored by the Bible's unlikely heroes and prophets.

This literary study of battle narrative argues that people tell the stories of war in a typical way that transcends history and culture. By understanding the tradition, audiences can recognize the particular emphasis and themes by the ways a story expands or diverges from the expectations of the tradition.

Part I explores various narratives of the ancient Near East to describe the heroic and the royal battle patterns. The heroic pattern celebrates the triumph of a communities values and culture over an enemy representing chaos and destruction. The royal pattern continues that but particularly celebrates the relationship between the king and the deity.

Part II traces how the Bible’s historical books use and reshape the patterns. Exodus 14 contains arguable the most important narrative, which tells how the Lord alone, without any human assistance except for Moses raising his staff, defeats the Egyptians at the Red Sea. This story asserts the fundamental theme: The Lord is the hero.

Chapter 5 examines the story of David and Goliath (1 Samuel 17), which closely follows the heroic pattern except for the unlikely hero. While the traditional hero typically manifests the ideals of manly strength and virtue, David is a boy, an unlikely hero, yet this motif recurs throughout the biblical tradition. Chapter 6 examines this motif first in the story of Judith, which reshapes the heroic pattern for her triumph over Holophernes. The Book of Judges likewise tells of the victories of other unlikely heroes, often with their weapon of deception: the left-handed Ehud, the woman Jael, the frightened Gideon, the bastard Jephthah, and the blinded Samson. In each case, the unlikely hero points to the basic biblical theme: The Lord is the hero.

Chapter 7 explores the royal pattern which celebrates the relationship between the king and the deity. In the book that bears his name, Joshua shows himself the most faithful servant of his Lord. The pattern also shapes a number of the stories in 2 Chronicles as well as the stories about the kings of Judah. The kings of Israel, however, introduce a new tension with the prophet who represents the Lord. The main tension of these comedies turns on the recognition of the Lord as the true hero and recognition that the kings of Israel are loathed to give. As such, these stories are less about a battle with a foreign enemy and more about the tension within our community.

Chapter 8 explores battle and defeat, which runs contrary to the traditional pattern. This break with the tradition can signify a shift of allegiance to history and the reality of defeat. The death of the enemy hero is comic in the sense that it must be celebrated because the threat to our life and values and culture has ended. However, some death is tragic–the result of sin or flaw or fate. This death evokes sadness and pity, and we find it in the stories of David the King and most especially in the death of Saul and his Jonathan.

Mighty in Battle by Harry Hagan, OSB, © Saint Meinrad Archabbey, is licensed under a Creative Commons Attribution-NonCommercial-NoDerivatives 4.0 International License, except where otherwise noted.

Mighty in Battle by Harry Hagan, OSB, © Saint Meinrad Archabbey, is licensed under a Creative Commons Attribution-NonCommercial-NoDerivatives 4.0 International License, except where otherwise noted.

Scripture quotations are from New Revised Standard Version Bible: Catholic Edition, copyright © 1989, 1993 National Council of the Churches of Christ in the United States of America. Used by permission. All rights reserved worldwide.